Looking at a Hokusai picture

Take a minute and look carefully at the picture immediately below. Then scroll down past the picture to read the rest of this article. 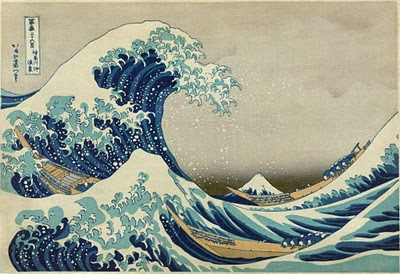 The Great Wave off Kanagawa, Hokusai's most famous print
What do you notice first? If you're from a Western culture, it's almost undoubtedly the overwhelmingly large wave on the left. That's because we Westerners read, and visually scan, from left to right. When looking at a printed page, painting, or computer screen our eyes automatically seek out the upper left corner.
But Hokusai was a great Japanese artist. The Japanese people (and folks from many other Eastern and  Mid-Eastern cultures) visually scan, read, and write from right to left. You cannot, therefore, truly understand Hokusai's "Great Wave" painting unless you view it from his perspective; that is, from right to left.
Try this: view the reversed image. Then read the rest of this article. 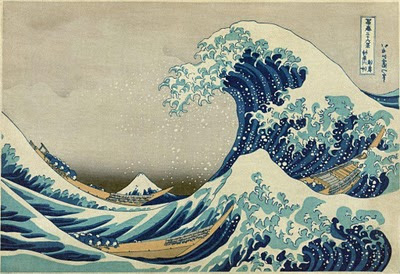 I'm betting a whole new world was revealed! Why? Your initial focus was no longer on the overwhelming wave. Instead, your automatic visual scanning habits focused you first on the struggling boatmen and their descent into the wave as it begins to tumble over them.
As Matthi Forrer, Curator of the Japanese Department at the National Museum of Ethnology, Leiden, has written, "Hokusai's 'Great Wave' was designed to tumble into the viewer's face." Viewing it reverse, you may experience a markedly different sense of movement, and find your emotional reaction affected so that you're much more caught up in the plight of the fishermen. Mount Fuji may also become more visible to you in the center background (this print is part of Hokusai's famous "36 Views of Mount Fuji" series).
As this small experiment viscerally demonstrates, the manner in which your intended audience members visually scan the screen strongly influences their ability to "take in" - and even emotionally respond to! - your instructional content and navigational aids. Try never to lose sight of this fact!


Loretta Weiss-Morris [What You See Depends On Where You're From]
Posted by Yannis at 12:21 AM