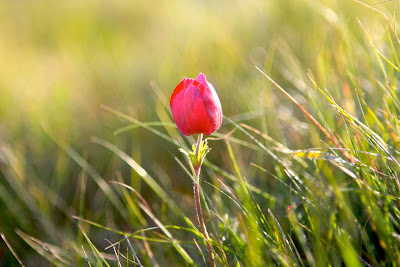 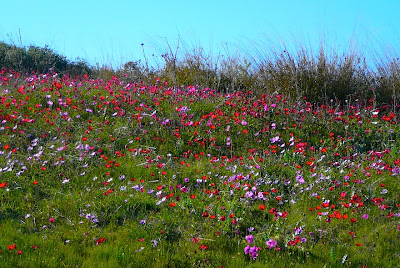 Email ThisBlogThis!Share to TwitterShare to FacebookShare to Pinterest
Labels: Poetry


One of the giants of space physics and 20th century astrophysics, Sir  William Ian Axford, died on Saturday, March 13, 2010 at his Napier home  in New Zealand after a long illness. Born in Dannevirke, N.Z., on  January 2, 1933, he was 77 years old and widely regarded as one of New  Zealand's greatest scientists. Despite his enduring passion for the  New Zealand cricket and rugby teams, he lived most of his adult life  outside New Zealand, starting in 1957 when he began his graduate  studies in the Mathematics Department of Manchester University in the  U.K. This occurred just prior to the launch of Sputnik I, an event that  eventually greatly influenced his career. His thesis supervisor was the  renowned aerodynamicist Sir James Lighthill, but Ian also learned a  great deal from astrophysicists such as Franz Kahn and Allin  Goldsworthy who were also at Manchester. Ian spent time at Cambridge's  Department of Applied Mathematics and Theoretical Physics, encountering  numerous interesting people who later distinguished themselves in  plasma physics and astrophysics. Among them was Fred Hoyle whose ideas  about cosmic rays very much later motivated one of Ian's most  outstanding discoveries - the mechanism of diffusive shock acceleration  - and with it the almost universally accepted explanation for the  observed cosmic ray spectrum (at least up to about 10^14 eV/nucleon),  solar energetic particle events, anomalous cosmic rays, and so forth.  Ian's time in the U.K. cemented his style of scientific presentation,  which, for some of us, occasionally presented a challenge - an  interesting marriage of acute physical insight, an uncanny ability for  order of magnitude estimates, and a desire that everything appear as  effortless as possible! This conciseness of exposition made his  publications both very readable on the surface, but very frustrating  for students and others needing to work out the details.

From Cambridge, Axford joined the Defense Research Telecommunications  Establishment (DRTE) In Ottawa, Canada where with Colin Hines, he did  some of his most renowned work in developing our understanding of the  Earth's magnetosphere and ionosphere (although Ian heartily disliked  the distinction between the two preferring Gold's definition that  incorporated both). Illustrating Ian's insight, one of his most  renowned papers (with Colin Hines addressing magnetospheric convection)  contains only one equation, E+VxB=0, despite being a theory paper! It  was during this period too in Canada that Ian began to develop his  lifelong appreciation for the science done in the then Soviet Union,  often providing an important if informal role in communicating  important observations and theoretical ideas to the west. This did not  always endear Ian to some but he could be quite cutting in return.  After a year spent in New Zealand, Ian moved to Cornell University in  1963. The `60's and the Apollo era was a time of considerable  excitement for space physics - the golden age - with an abundance of  funding, exciting open problems wherever one turned, and a community  that was young and vigorous. Ian was at the forefront of many of the  new ideas being developed, including ideas about cosmic ray transport,  the effects of modulation (ranging from the cosmic ray transport  equation, particle diffusion, the telegrapher equation, amongst others),  solar flares, substorms, collisionless shocks, the always contentious  issue of reconnection, and even the coronal heating problem. Indeed,  the idea that the Earth possessed a bow shock was for a time extremely  controversial given the absence of particle collisions but Ian was,  with others, instrumental in developing and pushing forward the  collisionless shock concept. While at Cornell and then later at the  University of California, San Diego, Ian supervised a number of  students through their PhD degrees, including Len Fisk and Tom Holzer  (later to be NASA Associate Administrator and Director of the High  Altitude Observatory in Boulder respectively).

Not surprisingly, Sir Ian became editor of the Journal of Geophysical  Research in 1969, introducing a number of innovations that persist to  this day, including the use of at least two referees and their  identification. Under his leadership, the JGR was propelled to its  current preeminence. During this period, Ian was prominent in helping  lay the groundwork for future space missions, many of which came to  fruition a decade or more later. This included what later came to be  the Voyager missions, originally conceived of as the Mariner-Jupiter- Saturn missions. It was at this time too that the first out-of-ecliptic  mission was conceived as part of a coordinated plan to explore the  outer solar system. This became of course the equally successful  Ulysses mission.
With the new missions, Ian's interests gravitated a little towards the  magnetospheres of the outer planets, especially their interactions with  the active moons. The Voyager missions were rightly regarded by Ian as  one the greatest scientific-cultural achievements of the 20th century  and he was a strong advocate and supporter of the program. The breadth  of Ian's scientific interests is reflected in virtually every aspect of  the Voyager mission, from the various planetary magnetospheres, their  moons and interactions, particle acceleration, all the way to the  nature of the solar wind interaction with the interstellar medium. His  1972 review of the solar wind - LISM interaction was the standard in  the field for decades and the prescience of his views on the importance  of interstellar neutral hydrogen in shaping the physics and structure  of the large-scale heliosphere only came to be fully appreciated in the  mid-1990's. 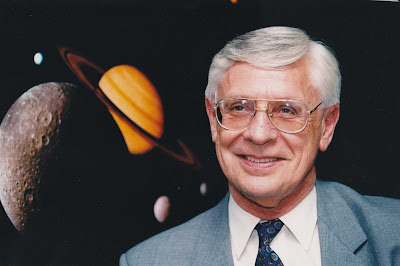 Ian's stay at UCSD ended in 1974 when he was appointed, at the age of  41, to the position of Director of the Max-Planck-Institute of Aeronomy  (MPAe) in Kattlenburg-Lindau, Germany. There is little doubt that Ian  had a transformational effect on the MPAe, drawing an international  cast of visiting scientists and propelling the institute into multiple  spacecraft missions. For many, the MPAe became for a time very much  one of the world-leading centers for space physics and planetary  physics, and many of us came of age scientifically in Katlenburg-Lindau,  spending time working with or drawing inspiration from Ian. We well  recall the afternoon tea times spent on a somewhat overused and shabby  couch in front of a blackboard in the refectory, trying to formulate  mathematically some problem or other. This was a wonderful time and  wonderful way of doing science, which sadly appears to be disappearing  from our scientific culture.
The spacecraft missions that Ian was especially involved with during  his time at the MPAe included Ulysses, the cometary mission Giotto, and  SOHO. These missions were outstandingly successful scientifically, but  their genesis and shepherding to successful launches demanded skills at  an international political level that were very demanding. Ian's  stature and his dual US-European perspective proved invaluable in  ensuring that these missions became the success that they were. One of  the great legacies from these missions, especially Giotto, was the  drawing of smaller countries without a strong space physics tradition,  such as Ireland, into major spacecraft missions. This had a  tremendously stimulating effect across Europe. These administrative and  political activities of course drew heavily on his time, but he still  found time to pursue some of his scientific interests. Among his most  important contributions in his later career was, as mentioned above,  his elucidation of the diffusive shock acceleration mechanism that is  now thought to operate at collisionless shock waves. This work in many  ways epitomizes Ian - in discovering the idea of diffusive shock  acceleration, Ian drew from his extraordinary knowledge of cosmic ray  transport, and his deep understanding of shock waves and MHD. It is  probably no exaggeration to suggest that perhaps nearly 80% of  published papers in space- and astrophysics discussing particle  energization rely on the diffusive shock acceleration mechanism,  illustrating the remarkable fruitfulness of Ian's many ideas. Ian also  contributed in 1999 to a mechanism, now highly favored, of explaining  non-thermal X-rays from clusters of galaxies. Sir Ian retired from the  MPAe as Director in 2001. During his time as Director of MPAe, Ian also  served as Vice-Chancellor at Victoria University in Wellington from  1982. Here he led the creation of the research school of earth sciences  and encouraged the development of the Institute of Policy Studies and  the Stout Research Centre. Ian continued to be active for some years  after retirement, accepting the Pei-Ling Chan Chair of Physics at the  University of Alabama in Huntsville (2002-04), as well as spending a  number of months each year at the University of California, Riverside  and the MPAe. In addition to science, Ian took a considerable interest  in history, co-authoring an interesting book ("In Soso's Web") with Tamara  Breus about life in the USSR.

Given Ian's extraordinary career track, he was the recipient of  numerous honors and prizes. At the remarkably young age of 39 (1972),  he was awarded the John Adams Fleming medal by the AGU. Other notable  international awards include the Space Science Award by the American  Institute of Aeronautics and Astronautics (1970), the Tsiolkovsky Medal  by the Kosmonautical Federation of the USSR (1987) the Chapman Medal by  the Royal Astronomical Society (1994), and the New Zealand Science and  Technology Gold Medal (1994). Ian was greatly honored in New Zealand,  receiving awards and honors not typical of an ordinary scientist. Ian  was awarded New Zealand's top science honor, the Rutherford Medal, in  1995, "for his excellent contribution to fundamental research which has  led to a deeper understanding of the nature of planetary magnetospheres,  comets, interplanetary space, the behaviour of interstellar gas and the  origin of cosmic rays." At the end of 1995, he was made a Knight  Bachelor - one of the last under the imperial system before the  introduction of New Zealand honors - one year after being named New  Zealander of the Year ... Ian also led a number of international  organizations, serving as president of COSPAR, the Space Research  Committee of the International Council of Scientific Unions, and the  European Geophysical Society, and was vice-president of the Asia- Oceania Geophysical Society. Finally, Ian was a foreign associate of  the National Academy of Sciences in the United States, a fellow of the  Academia Europaea, a fellow of the Royal Society, and a fellow of the  American Geophysical Union. 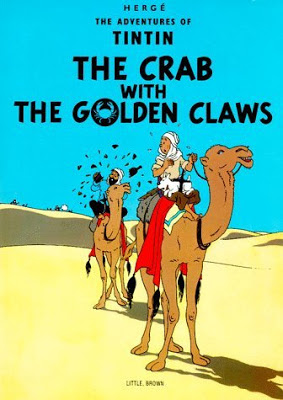 30 years without Hergé:
Georges Prosper Remi (22 May 1907 – 3 March 1983), known by the pen name Hergé, was a Belgian comic book writer and artist. His best known and most substantial work is the 23 completed comic books in The Adventures of Tintin series, which he wrote and illustrated from 1929 until his death in 1983.
Posted by Yannis at 7:44 PM No comments: 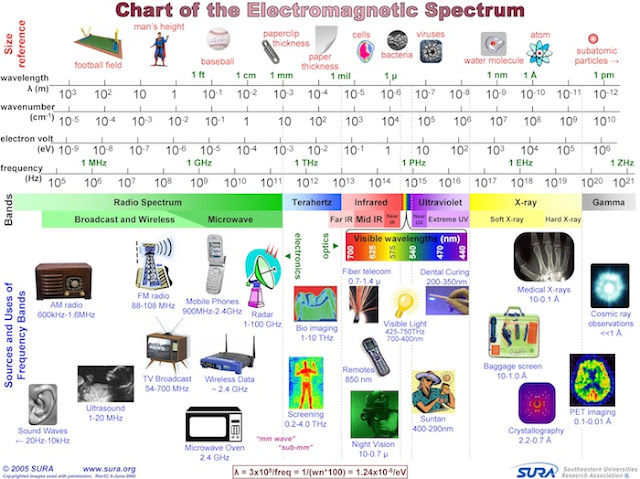 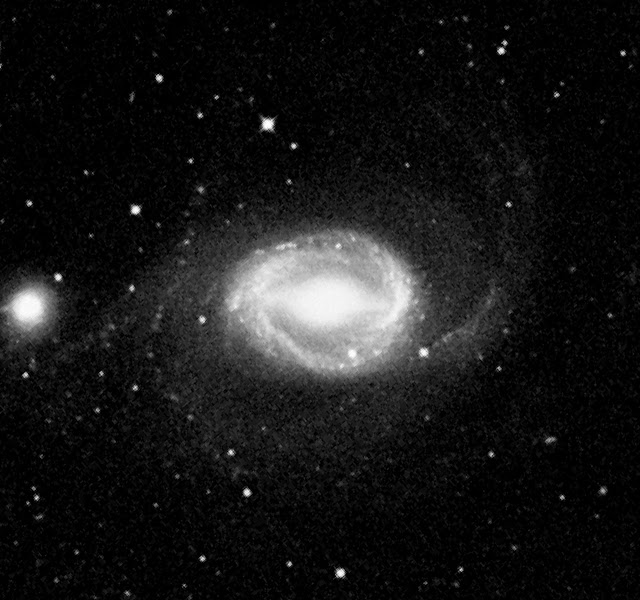 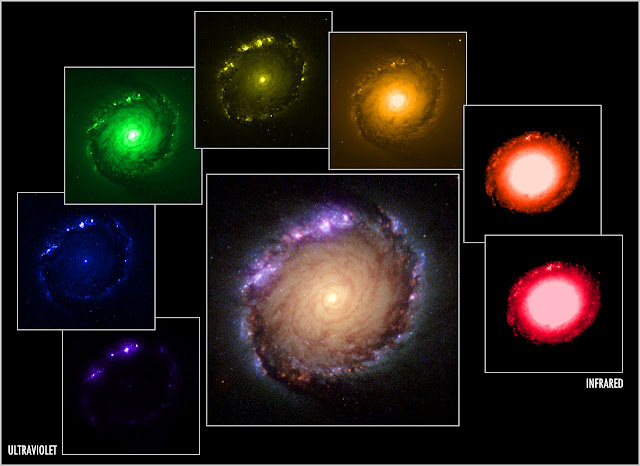 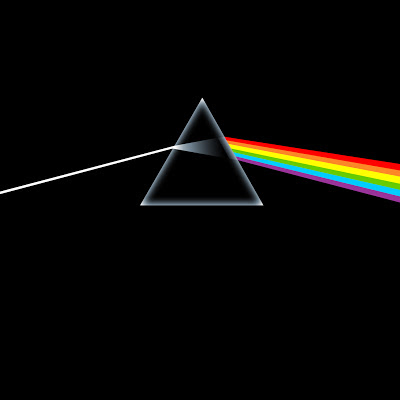 40 years Dark Side of the Moon

Racing around
To come up behind you again

Shorter of breath
And one day closer to death

Every year is getting shorter
Never seem to find the time

Hanging on in quiet desperation
Is the English way

Home
Home again
I like to be here
When I can

Far away
Across the field
Tolling on the iron bell
Calls the faithful to their knees
To hear the softly spoken magic spell...